As a child I was weary of the big world around me, and at that age, I could never comprehend how and why I would feel a constant gut-wrenching worry about most things. Once I became more self-aware and learnt about mental health on a deeper level, I realised I was suffering from high functioning anxiety all this while, which I had childishly defined as being ‘too sensitive’. I had a hard time explaining this whole concept of mental health to my family and that’s when it really hit me that the generation gap is a big factor in the understanding of mental health across different generations. What I am able to question today is something my parents would never even consider a valid question to ask an adult in their time.

One of the most common factors for individuals with emerging mental health conditions to avoid seeking help is the anticipated discrimination which could potentially lead to social marginalization. Personally, I remember having had a few emotional outbursts early on which got me a personality trait rather than an actual understanding of my irrational fears and impulsivity through the lens of cognitive psychology. Today as an adult, I realised that the Generation X lack a succinct understanding of mental health as a concept which has omitted them from introspection of their own behaviours for a very long period.

A study conducted by the American University in DC, states that millennial’s who grew up hearing about anxiety, depression, eating disorders, and suicide were more accepting of others with mental illness. They say the first step to getting help is to speak to your loved ones/family. But how many actually act on that first step? More often than not, getting that conversation going with your guardians is more difficult than getting the help required afterwards. The conversation that takes so much time to happen is actually the main preventive measure to prolonged mental illness, and possibly the most delayed action step.

The ‘generation gap’ is what the youth finds hard to cut through when they attempt to explain their psychological state, without frightening them or heightening their feelings of insecurity, as care-givers. The difference between mental health and physical health is that initially the effects of mental health conditions are more subdued and easily camouflaged as ‘phases’. Once you have that conversation, is when you discover the actual psychological state behind those behaviours which is a difficult revelation for the care-giver. It is then that they finally choose to accept its existence and to address it for what it is, stripping away all the false veils.

The stigma attached to mental health still exists today but for the Generation X this subject was a complete taboo attached with various misconceptions. Just within the frame of my limited experience, I’ve noticed individuals struggle to accept or question their behaviours without feeling attacked or triggered in a certain way. The unfortunate complex of inferiority as a mental health patient is usually what widens the generation gap even further. This mind-set actually creates more problems as they choose to avoid accepting the existence of it, consequently setting an even longer path of suffering without therapy. Fortunately, as we move towards a world where we diminish irrelevant comparisons of capabilities and success, the stigma around mental illness becomes less powerful and allows room for more conversation without judgement.

One of the factors that really affect the likelihood of conversation around mental health is the notion of choice. Mental illness is never chosen, it is a state of being that needs to be addressed, not concealed. The idea that you can just ‘switch off’ or ‘stop over-thinking’ about your psychological state still exists within the Generation X. Unfortunately, cliché religious and cultural remedies that were passed on from generations to deal with periods of distress were all they had at their disposal. The generation gap actually consists of a gap of misinformation and archaic solutions that need unlearning to understand the evolving mental health disorders of a digitally advanced world where scientific knowledge is easily accessible.

There is no denying that we have all come a long way in spreading mental health awareness and cultivating a more accepting environment towards it. However, the biggest change is to be able to create acceptance within households and between generations.

The first step to actually getting help is talking about it, and it needs to happen at home. Mental health education is not limited to just mental health professionals anymore, basic mental health knowledge needs to be incorporated at home as well. Ultimately, the idea is to get that conversation out in the open for the betterment of society and individuals as a whole.

Normalize talking about your emotions and feelings as a part of your overall well-being. It’s not just when things get rough, but even when things have been positive, express it and allow care-givers to witness how a positive mind-set can truly impact your quality of life. It is important to start realizing that during times of change or trauma, space for mental well-being and time to pause is essential for better healing and processing. It needs to be emphasized more often that physical well-being and mental-wellbeing go hand in hand and one cannot possibly be emphasized over the other. When we say health is wealth; this definition needs to imply mental health too.

Create a safe space of non-judgment at home. If you want acceptance, you need to accept their surface-level understanding of emotions too. Bring in perspective wherever possible when assumptions are being thrown around, help them understand why people react the way they do from a psychological point of view and how fulfilling life can still be if you work on your areas of mental development. Change the definitions of what an emotionally strong person is, strip away misconceptions about crying, depression and suicide in a way that educates. Let them know that you accept their differences in mind-set, generation and experiences, and irrespective of that, you trust them and they can trust you too.

An expat in Dubai who loves engaging with diverse people and having honest conversations about life, through her blog- Egoiste Life. As a passionate artist, Manahil spends most of her weekends writing about the world, reading poetry and creating adventurous memories with the people she loves.

Manahil can be reached at: 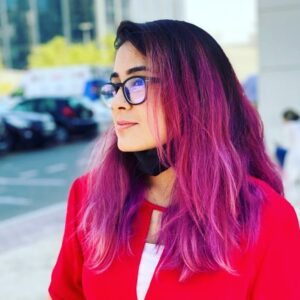 Insecurities and the Emergence of Self-Love

هل تحتاج إلى مساعدة؟
Are you in crisis?